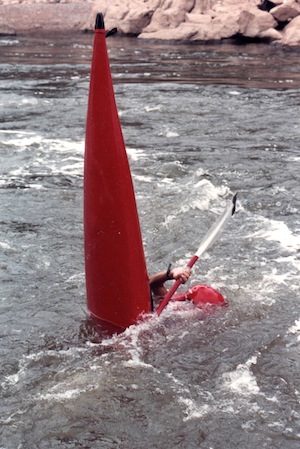 I grew up at the rural-suburban fringe in Maryland in a town close to the Potomac River. I received the standard American public school education and was fortunate to gain experience with computers, which were relatively rare at that time. I learned outdoorsmanship and whitewater kayaking at Valley Mill Camp and other camps. I spent many summer days paddling on the Potomac. In my youth I kayaked many boatable rivers in the Mid-Atlantic region with a sampling throughout West Virginia, New York, Connecticut, and eastern Canada.  Little did I know that only a few years before had the nation undergone the birth of the modern environmental movement that was responsible for initiating the clean up America's large urban rivers, like the Potomac, making it possible for me to have the experiences I did.  When I was only 12-13 years old, I saw mountain rivers in West Virginia that were orange and could not understand how that level of pollution and degradation could be acceptable to society.

As an undergraduate student at Wesleyan University I gained a broad-based liberal arts education that honed my critical thinking skills.  I double majored in a unique program called "Science in Society" and a more traditional major called "Earth and Environmental Science." The summer after my first year I was lucky enough to work at Ford Aerospace doing a project for the design of the space station.  My job was to track "element unique", which were all items that were not part of any of the 5 major systems and thus their weight and energy were not being tracked properly.  In my effort to compile a database on element unique I had access to the full NASA database and library, which enabled me to learn broadly about all kinds of interesting things related to the space program. At Wesleyan I was fortunate to have faculty mentors who understood how to engage undergraduates in scientific research, most notably Professor Joop Varekamp.  Under his supervision I led two other students in a campaign to sample the acid-brine waters of the crater lakes at Keli Mutu volcano on the island of Flores in Indonesia during the summer before my senior year. This was an extremely challenging field campaign that taught me the difference between envisioning an experimental design on paper and facing the harsh reality of natural law in a harsh landscape in a distant land.  Nevertheless, I embraced the challenge of understanding nature on its own terms "in the field".  I subsequently analyzed the water samples to ascertain the geochemistry of the volcanic lakes, wrote a senior thesis, and eventually published 3 journal articles on the topic.  Writing my senior thesis was the most difficult writing challenge I have faced thus far, with future endeavors likely facilitated by what I learned from this initial outing. As an undergraduate I also got to visit volcanos in Japan, the barrier reef off the coast of Belize, the bedrock rivers of northern Connecticut, and of course the salt marshes of Long Island Sound. In the summer after my sophomore year I volunteered with the Student Conservation Association at the BLM office in Burley, Idaho. There I worked four 10-hour days and spent long weekends exploring and kayaking many rivers in that Idaho-Wyoming region. 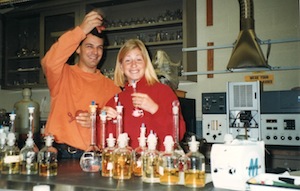 Processing and running salt marsh sediment samples for cations on the AA with Rina Schumer, who is now a research professor at UNR/DRI. 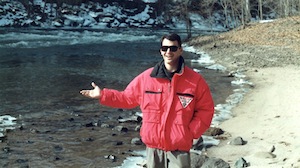 Exploring the rivers of Connecticut.

Subsequently I switched gears from basic science to civil engineering and earned a Master's degree in environmental water resources engineering from UC Berkeley. At Berkeley I was challenged to further expand my quantitative education and toolbox.  Although an MS thesis was not required for the program I was in, I chose to write one anyway as a project and I chose to focus on the topic of urban rivers.  At this point I noticed a tendency for academics to write off heavily impacted settings like urban rivers and I disagreed with that perspective.  I traveled as much of the Los Angeles River as possible to gain a perspective on the worst physical river conditions in the United States. I also investigated the Guadelupe River in San Jose, which is in a highly impacted urbanized region, but was receiving a lot of management attention and thought at the time.  As part of my MS "thesis", I came to the conclusion based on institutional analysis that the only way to manage a river is to insure that there is at least one unique "tool" for each management goal. Instead of trying to optimize management with a multi-objective framework reliant on few tools, I came to the conclusion that a broad-based approach to management that avoids overly idealistic optimization is needed. 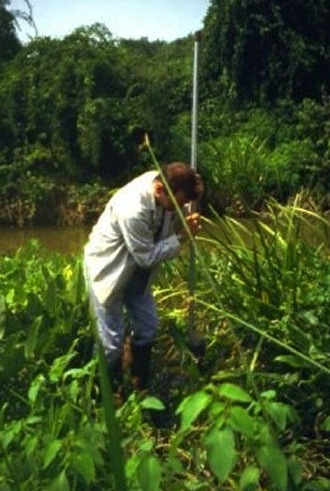 Berkeley was an enjoyable place to live and I learned a lot there, but it was the wrong place for me to grow intellectually beyond an MS degree. Between my BS and MS educations I spent a summer at Johns Hopkins University working under the supervision of Professors Grace and Lucien Brush to begin a project investigating the hydrology of tidal freshwater wetlands in aid of on-going ecological studies.  I had a lot of opportunities that summer and greatly enjoyed the scholarship that the Brushes exposed me to, so after my MS degree at UC Berkeley I returned to JHU for my PhD.   During my first semester there I wrote a successful funding proposal to the National Oceanic and Atmospheric Administration to study the ecophysical processes of tidal freshwater delta evolution using the NOAA NERRS site, Otter Point Creek, as the focal setting for my research.  The grant was big enough to do a PhD, but small enough to necessitate aid from NOAA NERRS staff, MD DNR staff, The U.S. Army at Aberdeen Proving Ground, and a host of volunteers.  The main thrust of my research involved biweekly monitoring of sedimentation and erosion rates using a new approach I developed, which I called the "Net Sedimentation Tile" method. Aided by a great many volunteers (both fellow graduate students and private citizens associated with the Anita C. Leight Estuary Center), I was able to track two adjacent deltas in the Bush River of Chesapeake Bay over a 2.5 year period.  My work addressed ecophysical processes over time scales ranging from hourly to interdecadal.  I was extremely fortunate to be able to work across hydrology, geomorphology, and ecology under the watchful eye of brilliant mentors and colleagues, including Grace Brush, William Hilgartner, Linda Hinnov, Marc Parlange, Peter Wilcock, and Reds Wolman.  Also, I am endebted to NOAA and MD DNR for opportunities to perform pro bono outreach to scientists, stakeholders, K-12 educators, students, and the public.

I began as a professor at University of California at Davis straight out of my PhD in 1998 at the age of 27.  I earned my promotion to tenure by 31 and again to full professor by 37. My appointment is a blend of the standard "Instruction and Research" position common to professors worldwide plus a position in the "Agricultural Experiment Station", which is an opportunity to do applied research and outreach. I view that blend as an obligation to balance traditional ivory tower creative scholarship with practical applications of science and technology to work with stakeholders collaboratively to try to solve complex problems. I am honored to work as a professor and have the opportunity to teach students at all levels.  I enjoy balancing research, teaching, service to theuniversity, and service to society. I receive more requests for help and applicants for student positions than I can accomodate, but once I commit to a project I try my best to tackle it as comprehensively as possible. Although life as a university professor has its ups and downs like any career, I am still drawn to the challenge of mentoring ambitious students and conducting novel scientific research for the benefit of the people of California, the Uniited States, and the world. I hope those whose lives I've touched pay it forward generously.

As I wrapped up my dissertation at JHU I gained experience as a geomorphology subcontractor aiding archaeologists with an investigation of landforms and geomorphic history on the Eastern Shore of Maryland.  That experience taught me that consulting projects provide rapid exposure to a great diversity of real-world problems and environmental settings, so I like to keep involved to continue to grow and learn. In addition to working for UC Davis, I do substantial pro bono work on the editorial boards of scientific journal, on the boards of various organizations, and aiding those who contact me out of the blue for help. I also work as a sole proprietor to offer environmental consultation on projects that are too small to run through UC Davis using the traditional education model involving the large cost for graduate students.  I do not maintain permanent staff as a professor or as a sole proprietor, so I focus on consulting projects where I can provide vision and leadership drawing from my education and experience. I have done projects on topics including stream restoration, river assessment, and water quality enhancement.