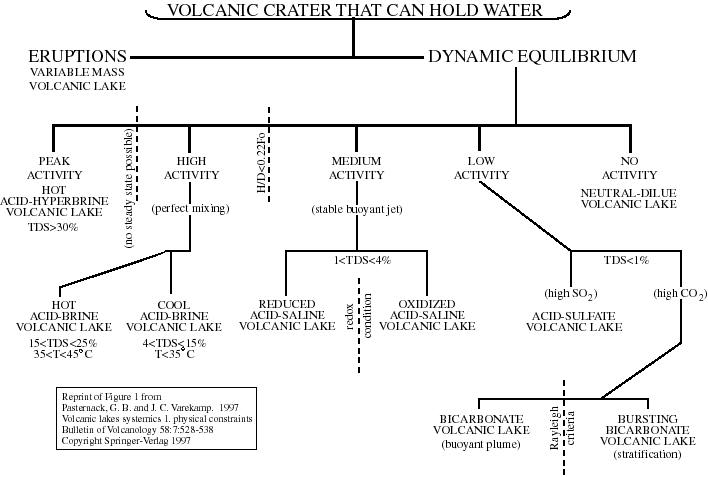 A genetic classification scheme for volcanic lakes has been developed based on characteristics of natural lakes and models of ideal lakes (see Pasternack and Varekamp, 1997). Classifications for many environments exist, but most rely on "looks" (i.e. morphology or descriptive characteristics). This problem has been avoided with volcanic lakes by basing the delineations on process thresholds, not arbitrary delineations in form. This approach has revealed quantitiative delineations on 3 levels of classification- absolute energy, hydrodynamic mixing regimes, and chemistry.

To explore the physical processes governing the delineations on the first 2 levels, a perfect mixing, steady-state energy/mass balance model was used. Energy terms used in the model include volcanic/geothermal inflow, radiative fluxes, conductive heat loss at the lake surface, evaporative heat loss, and the energy used to heat entering meteoric waters. These fluxes are equated and then solve iteratively for a steady-state lake temperature, with the additional constraint of maintaining mass balance for water. The dominant parameter that controls heat dissipation and thus lake temperature is lake surface area. Precipitation rate and catchment area determines a lake's survival potential in terms of maintaining water balance.

To download a compressed (.zip) folder containing the model for use with Mathematica, click here. There are many ways to run the model, dpeending on what one wants to find out.  it can be run using observational data from real lakes to obtain mass and energy flux and storage estimates or, as the figure below illustrates, it can be used to get at overall lake systematics. 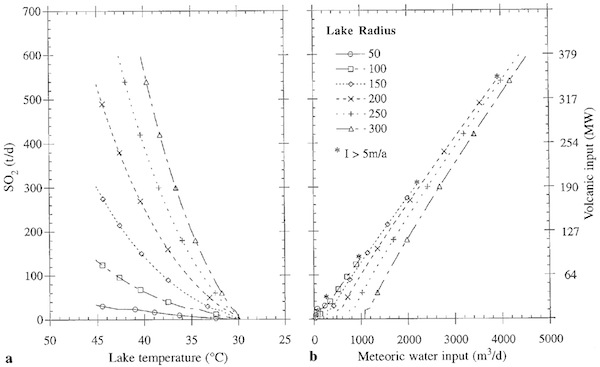 By searching for process scenarios that break down the above model it was possible to find real delineations in lake types. "Hot Acid-Hyperbrine" volcanic lakes are those whose volcanic/geothermal input is so large that no steady state condition is attainable under common atmospheric conditions. "Acid-Brine" lakes are those that exhibit near perfect mixing and can thus quickly achieve energy/mass steady state according to the principles of the model. "Acid-Saline" lakes have stable buoyant jets that violate the perfect mixing assumption. "Acid-Sulfate" and "Bicarbonate" lakes receive even less energy and may have buoyant plumes or be stably stratified. Finally, "Neutral-Dilute"volcanic lakes have no volcanic input and are thus hazard-free. Through its elucidation of the similarities and differences between types of lakes, including which ones are subject to which hazards, the classification aids in using easily measured lake characteristics (i.e. temperature, pH, and TDS) for initial volcano and lake hazard assessment. 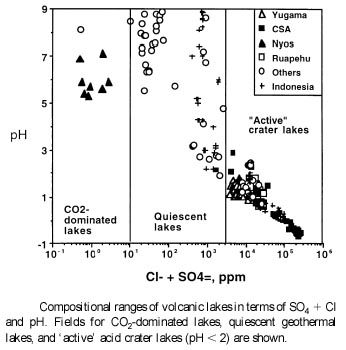 To further explore the range of chemical conditions among volcanic lakes, a database of 373 lake water analyses from the published literature was compiled and analyzed using several statistical and geomical analysis tools. Compositional variations are influenced by the flux of magmatic volatiles and / or deep hydrothermal fluids. The chemistry of the fluid entering a lake may be dominated by a high-temperature volcanic gas component or by a lower-temperature fluid that has interacted extensively with volcanic rocks.

Precipitation of minerals like gypsum and silica can strongly affect the concentrations of Ca and Si in some lakes. A much less concentrated geothermal input fluid provides the mineralized components of some more dilute lakes. Temporal variations in dilution and evaporation rates ultimately control absolute concentrations of dissolved constituents, but not conservative element ratios.

Most volcanic lake waters, and presumably their deep hydrothermal fluid inputs, classify as immature acid fluids that have not equilibrated with common secondary silicates such as clays or zeolites. Many such fluids may have equilibrated with secondary minerals earlier in their history but were re-acidified by mixing with fresh volcanic fluids. A new parameter to characterize these acid fluids has been developed with the "degree of neutralization" as the central concept. This leads to a classification of gas-dominated versus rock-dominated lake waters. A further classification is based on a cluster analysis and a hydrothermal "speedometer" concept that uses the degree of silica equilibration of a fluid during cooling and dilution to evaluate the rate of fluid equilibration in volcano hydrothermal systems. 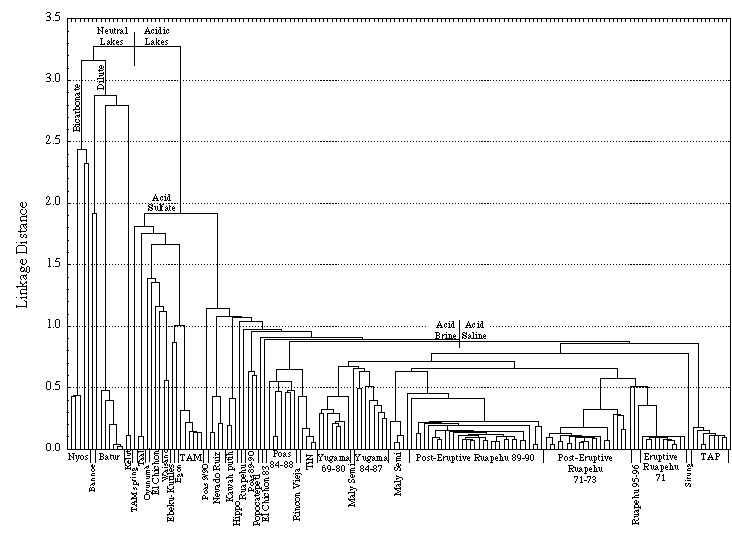