The role of hydraulic jump regime in scour at the bottom of a river step is not widely understood. Very few experimental studies of river steps have varied the hydraulic jump regime over the full range possible to explore this factor. To promote a better understanding of the general relevance of hydraulic jumps associated with river steps for water resources management and to guide research ultimately leading to prediction of river step morphodynamics, a conceptual model encompassing independent variables and responding processes was developed in which the key dynamics were grouped into five categories (see figure below). Evolution of a river step can be characterized by the processes of scour hole formation, upstream retreat, and change in step geometry. These processes are driven by a complex, interdependent set of hydrologic and geologic variables acting over multiple scales. Basin variables include the independent watershed inputs of water and sediment discharges as well as channel geology (see figure below). For example, some steps may exist in various geologic conditions ranging from well-bedded sedimentary bedrock to fractured homogeneous igneous bedrock. The role of sediment supply has been an important recent addition to shear stress models [e.g., Sklar and Dietrich, 2004; Gasparini et al., 2007]. The basin variables control the channel variables, which include the cross-sectional geometries within the channel, the channel slope, and the longitudinal spacing between river steps. In this framework, a sequence of cross sections is used as an indicator of complex 3-D channel morphology, since channel width and cross-sectional area often fluctuate down a mountain river system, even as they generally increase downstream because of increasing discharge. Basin variables also help shape the step morphology components of step height, planform shape of the step, step slope, and step roughness. Step height can be dependent upon step spacing [Wohl and Grodek, 1994].

All of the step morphology variables affect step hydraulics characterized by the nappe trajectory and hydraulic jump regime, though step roughness only affects the jump regime indirectly through nappe trajectory. Nappe trajectory and hydraulic jump regime are of central importance in the conceptual model because (1) the former is a key variable controlling jet scour of bedrock near the step toe [Mason and Arumugam, 1985; Bormann and Julien, 1991; Stein et al., 1993; Alonso et al., 2002], where toe refers to the slope break at the bottom of the step and (2) the latter controls turbulent lift forces that pluck and suspend bedrock downstream of the point of jet impact [Fiorotto and Rinaldo, 1992; Pasternack et al., 2007]. Nappe trajectories for linear overfalls have been thoroughly investigated [U.S. Bureau of Reclamation, 1948b; Vischer and Hager, 1998; Chanson, 2002], while those for overfalls with 3-D brink configurations have only recently come under some scrutiny [Falvey, 2003; Pasternack et al., 2006]. Hydraulic jump regimes for a free overfall include: supercritical flow with no jump, pushed-off unsubmerged jump (defined later in section 2.4), optimal jump, submerged jump, standing waves, and subcritical flow with no jump [U.S. Bureau of Reclamation, 1948b; Leutheusser and Birk, 1991]. Hydraulic jump regime is strongly influenced by discharge and tailwater depth [U.S. Bureau of Reclamation, 1948b; Pasternack et al., 2006], with the latter in turn controlled by upstream and downstream channel configuration. Step brink planform shapes that deviate from linearity cause nappe interference and a shift in jump regime for a given discharge and channel configuration [Falvey, 2003; Pasternack et al., 2006]. Additionally, the nappe regime has been anecdotally observed to be affected by the direction and magnitude of wind impacting it, but no scientific studies have yet explored nappe response to diverse wind regimes.

Step hydraulics such as jet impact, turbulent pressure fluctuations, drag, and lift drive channel morphodynamics by changing the size and shape of the scour hole [Lenzi et al., 2003; Alonso et al., 2002], step geometry [Pasternack et al., 2006], and upstream retreat of the step [Hanson et al., 1997; Bennett et al., 2000; Stein and LaTray, 2002]. Upstream retreat is determined by the relative erodibility and erosional force on the step top versus that on the face and toe of the step [e.g., Stein and Julien, 1993; Flores- Cervantes et al., 2006; Frankel et al., 2007]. The shape of the scour hole and the regime of the associated hydraulic  jump affect the erosional ability of the flow below the step. Scour depth has previously been shown to be dependent on step morphology [Alexandrowicz, 1994; Lenzi et al., 2002] and sediment supply [e.g., Marion et al., 2006]. Step morphodynamics, in turn, can affect channel geometry and step morphology.

The conceptual framework described above serves to organize past research, promote quantification of identified linkages, and highlight important gaps in the current understanding. A casual observer of major waterfalls and whitewater rapids in mountain rivers will quickly take note of the diversity and complexity of natural step morphologies. Addressing natural diversity presents the most important gap in the scientific understanding of river steps. This study addresses the problem of how channel expansions and constrictions through geomorphic units with steps affect step fluid mechanics. 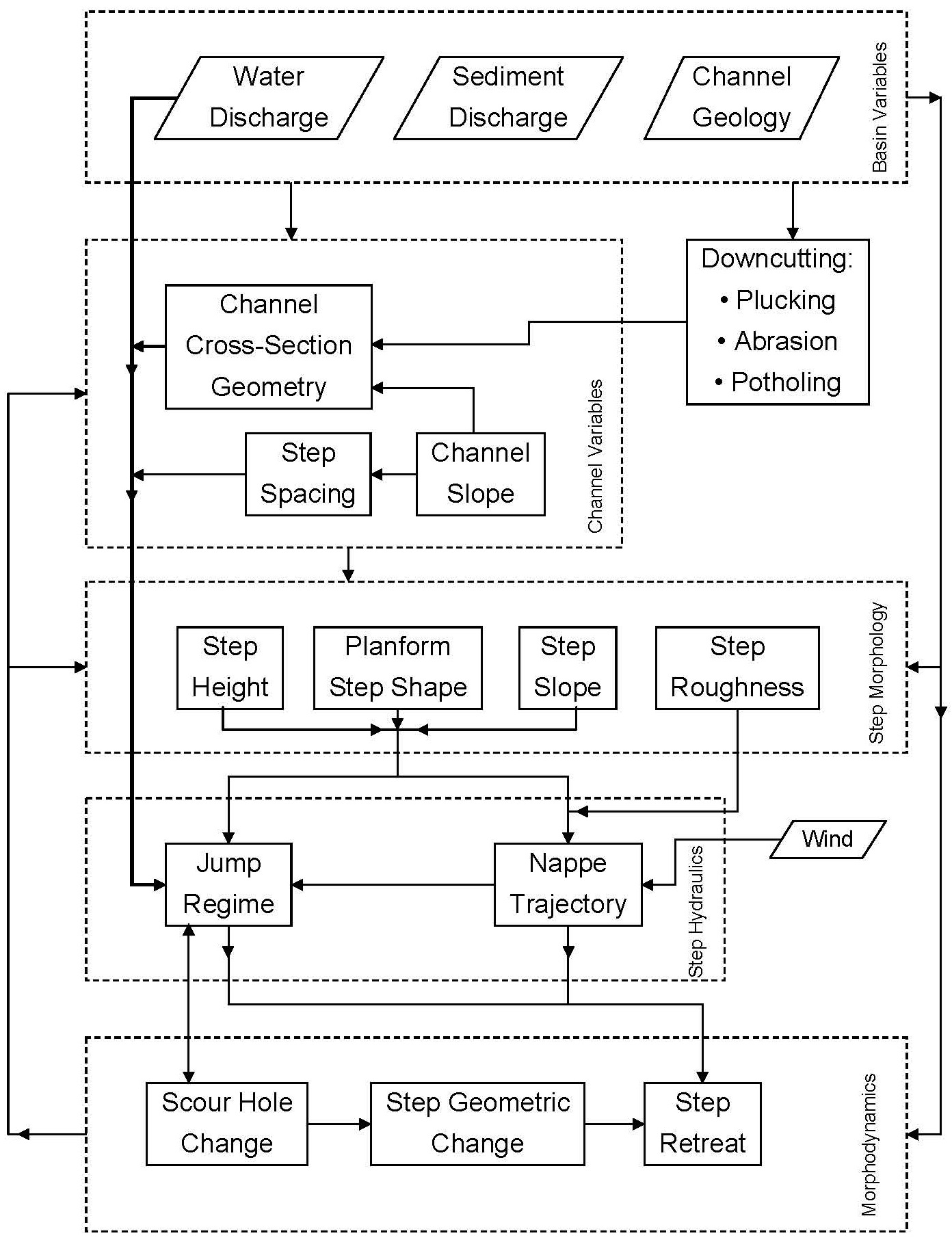 NSEAM 1.0 is presently implemented in Mathematica and in Excel versions, but only the Excel version is polished for public distribution.