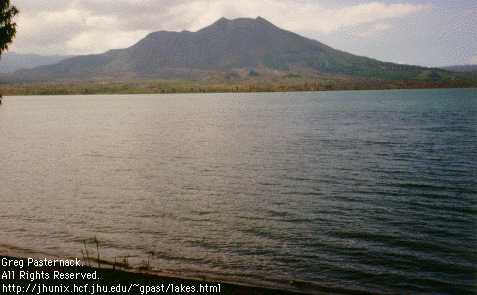 Lake Batur is located in the caldera of Batur volcano in northeast Bali, Indonesia. The lake is classified as a "neutral-dilute" lake because there is no known underlying hydrothermal activity, and any such activity is more than quenched by the abundant rainfall.

The chemistry of one of the hot springs (57 deg C) draining into Lake Batur was sampled and assessed as well. The spring is somewhat enriched in calcium, magnesium, boron, and silica with respect to the lake, but is depleted in sodium and sulfate. Lithium, potassium, and strontium are present in the two waters in identical concentrations.

From 1989-1992 Batur Lake significantly net decreased in temperature from 27.4 deg C to 23 deg C. Sulfate concentration and chloride concentration decreased by 17.8% and 8.3%, respectively. Among the detectable cations, no significant changes occurred during that same interval. No pre-1989 data for Batur Lake is available.