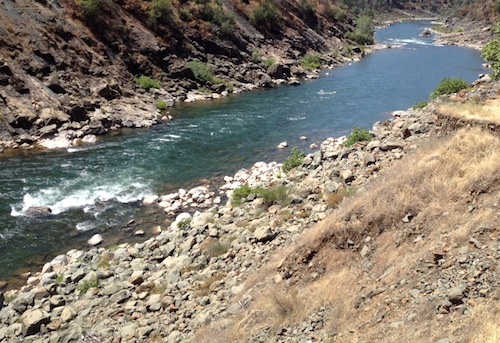 Most large tributaries to the Sacramento and San Joaquin rivers, which drain the Sierra Nevada, have large dams. Immediately downstream of several of these structures there are continuous stretches (>0.5 km) of exposed (or covered by a transient sediment veneer) bedrock channel. These stretches occur on the Sacramento River as well as the Feather, Yuba, Calaveras and Stanislaus rivers. In some cases a bedrock canyon may always have existed (e.g., Yuba), while in others, channel and floodplain sediments were scoured away by long-duration low flows that focused on riffles and infrequent floods that affected other channel landforms after the dam cut off the resupply of sediment. Given that dams block the influx of coarse sediment (i.e. cobble and gravel) into these bedrock reaches and to the alluvial valleys below, the bedrock reaches now play a disproportionately large role in the fate of anadromous Pacific salmonids that would otherwise migrate far upstream.  Therefore, it is essential to develope appropriate strategies for curating processes and landforms in this setting.

The lower Yuba River is ~24 miles (37.5 km) long from Englebright Dam to its junction with the Feather River. Steelhead trout and chinook salmon utilize the lower Yuba River for adult holding, spawning, rearing and migration. The habits and life-cycle patterns of salmonids are under intense investigation at this time spearheaded by the Yuba Accord River Management Team.  The Englebright Dam Reach (EDR) extends from Englebright Dam down to the junction with Deer Creek. It is a relatively straight bedrock canyon with a veneer of “shot rock” debris that is now almost devoid of river-rounded gravel and cobble necessary for salmon spawning. Shot rock is irregular-shaped angular cobbles and boulders blasted from surrounding hillsides. In this reach, shot rock was generated and spread by two distinct processes: rock excavation during the construction of Englebright Dam and hillside scouring during major floods. Englebright Dam Reach is also influenced by a backwater effect imposed by Deer Creek, since flood pulses out of Deer Creek usually come ahead of the larger and more snowmelt-driven inflows from the Yuba River. It is widely agreed among stakeholders that spring-run Chinook salmon that historically went far upstream would substantially benefit from a gravel/cobble augmentation program below Englebright Dam, and in fact such a scheme is required in the NMFS biological opinion. 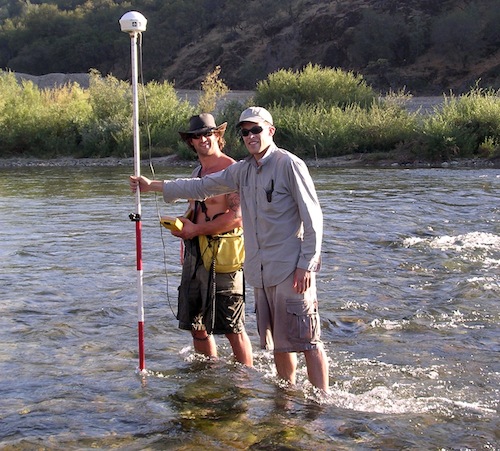 From 2003-2007 the Pasternack Lab was funded by the US Fish & Wildlife Service Anadromous Fisheries Restoration program to conduct independent baseline studies comparing the ecophysical processes and landforms at a highly functional site on the lower Yuba River with those in the top section of EDR between the Narrows II and Narrows I powerhouses.  Studies included historical analysis, detailed topographic mapping, substrate characterization, Chinook salmon spawning surveys, 2D hydrodynamic modeling, sediment entrainment assessment over a wide range of discharges, and other studies. This work was reported in Aaron Fulton's MS thesis (Fulton, 2008), the final technical report for the USFWS (Pasternack, 2008), and a peer-reviewed journal article in California Agriculture (Pasternack et al., 2010).

Among other detailed findings, six broader conclusions came out of the baseline studies of EDR: 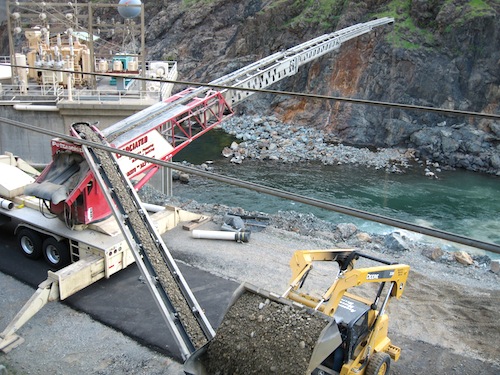 The United States Army Corps of Engineers (The Corps), the Pasternack Lab at UC Davis, and USFWS collaborated on an experimental gravel/cobble injection below Englebright Dam (in the pool below the Narrows II powerhouse) in November 2007.  The purpose of this experiment was to find out if and where gravel/cobble would deposit in the EDR and thus gain insight into the efficacy of gravel/cobble injection as a habitat enhancement tool for spring-run Chinook salmon in the EDR.  The basic study design involved injecting gravel/cobble during low flow in late autumn of 2007 and then waiting for high flows in subsequent water years to move it.  Then it would be possible to track where those materials went.

Five hundred short tons (361 cubic yards) of triple washed river gravel/cobble was purchased from a nearby quarry downstream. The material was trucked in ahead of time and piled on top of the gravel parking lot at the Narrows II powerhouse. On Nov. 29, 2007, the U.S. Army Corps of Engineers put as an estimated ~327 cubic yards into the river below Englebright Dam at the tailout of the Narrows II pool, leaving an estimated ~34 cubis yards on the road and steep embankment.

Pasternack (2009) investigated the status of the injected gravel/cobble after two winters, and some interesting lessons were evident.  Although the two intervening winters were relatively dry, some transport did take place.  Of the 327 cubic yards injected to the river, only ~3 cubic yards moved during the period when flow was ≤ 8014 cfs.  After a flood with a peak flow of 15,381 cfs, a total of ~75 cubic yards moved.  That amount includes the ~3 cubic yards moved prior to that, so that means that ~252 cubic yards remained in the gravel/cobble injection pile in the Narrows II pool as of July 1, 2009.  For the 2010 water year, the peak discharge occurred in June 5, 2010 and it was only 6,928 cfs.  Thus, heading into the 2011 water year much of the injected sediment was still in the original injection location.

Preliminary observations of Chinook salmon redds in 2009-2010 by the Yuba Accord RMT found that 120 redds were located in the EDR between September 7, 2009 and February 22, 2010.  This response to an extremely limited gravel injection indicates that if more gravel was present, a population of spring-run Chinook salmon could be accommodated.

Building on the lessons from the pilot gravel injection, a comprehensive plan for long-term cobble/gravel injection was developed.  The GAIP document included six elements: 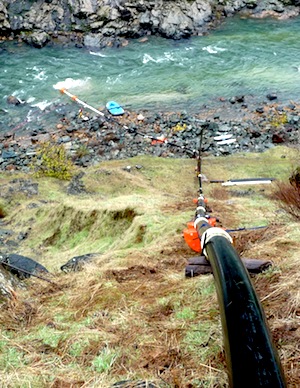 Over 5,000 short tons of gravel were added to the EDR between November 2010 and January 2011.  The winter of 2011 saw high flows that redistributed the seidment throughout the reach.  In fall 2011 Chinook salmon spawned on landforms formed by the deposited sediments.  A study was done to investigate where the sediment went and why as well as where Chinook spawned and why.

In July-August 2012 another ~5,000 short tons of gravel were added to the EDR and another study was done to investigate what happened between then and December 4, 2012 when a flood caused by an atmospheric river moved the sediment out of the injection zone. A suite of studies virtually identical to those done for the 2010-2011 project were done and are available to the public.

In early December 2012 there was an atmospheric river that aimed right at the Yuba River watershed.  That produced a flood with a peak of ~35,000 cfs.  This flood redistributed sediment throughout the EDR, but only a very small amount left the reach.  The riverbed was mapped in summer 2013 to find out where it was eroded from and where it went. The report about this was submitted to the USACE on 5/8/14, but it is not available to the public at this time. Come back here periodically (or email Dr. Pasternack) to see when it is available to the public.

Watch the video below to see a time lapse movie showing the whole gravel sluicing operation form start to finish.  Photos were taken every ~15 minutes with additional photos interspersed when the motion detector on the camera was triggered.  Photos were encoded at 15 frames per second.

If the streaming video player below does not work for you, then you can download the video to your computer and watch it thereafter by clicking on the link below.  If you can watch it streaming, then you do not have to download a video file at all.

If you are unable to see the video, please try: Chrome, IE or Safari.

In July-August 2014 another ~5,000 short tons of gravel was added to the EDR.  At this point my group at UC Davis is playing a minor role in implementation and monitoring, as we have answered the major scientific questions and now it is primarily a matter of carrying out the GAIP.

In July-August 2015 another ~5,000 short tons of gravel was added to the EDR.  At this point my group at UC Davis is playing a minor role in implementation and monitoring, as we have answered the major scientific questions and now it is primarily a matter of carrying out the GAIP.