High-resolution tacheometric field surveying was integrated with computer-assisted drafting to visualize and contrast 3-D bed and water surface digital elevation models (DEMs) for submerged and unsubmerged hydraulic jump regions in a bedrock step-pool channel. Measurements were conducted for two discharge conditions. Since previous applications of three-dimensional field mapping and digital elevation modelling of stream channels have been limited to smoothly contiguous gravel-bedded systems, surveying was optimized by topographic setting and scaled to localized bed and water surface discontinuities. Traces and visualizations of the jump regions indicated dichotomous decimeter shifts in water surface topography occurred for both jump regions from lower to higher discharges. Systematic removal of the survey points and DEM differencing indicated point densities of 10 points per sq. m, in conjunction with a survey structure targeting grade breaks of 0.3-0.5 m, were required to capture decimeter form variations of the natural jump regions. The DEMS highlight the importance of recognizing the relationship between transcritical flow structures and localized topographic heterogeneities in bedrock channels. 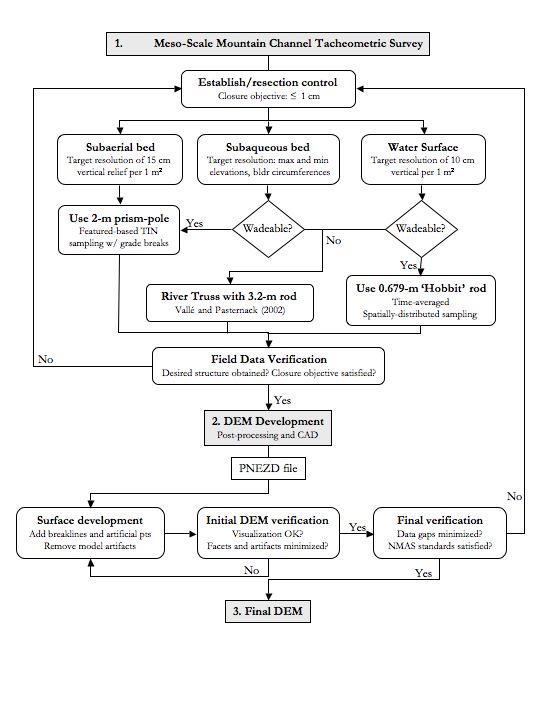 For subaerial bed topography, a stratified feature-based triangulated irregular network (TIN) sampling approach is used. This approach is based on feature-based surveys of gravel-bedded systems, and employs high-density transects between major topographic breaks and stakeout of individual features. Since natural jump regions are poorly suited to transect-based methods, surveying is conducted using a series of approximately equilateral triangles scaled to bed and water surface discontinuities. Generally, the maximum elevation difference between each set of facet vertices is set to 0.15 m. This approach improves DEM quality over a transect-based approach since the survey points are scaled directly to topographic features and are better suited to the TIN algorithm.

To minimize edge artefacts, survey areas are extended beyond the jump region boundaries. The top and bottom edges of grade breaks exceeding 0.3 m of elevation are also surveyed. In the presence of bed veneer, point density is coarsened and the prism pole should be pushed down to underlying bedrock. Woody debris may be present throughout the area but should not be incorporated into the survey. Similar to studies in gravel-bedded systems, stakeout points are collected in areas of data gaps.

For submerged bed topography, two approaches are used. When the bed is visible, the feature-based TIN approach discussed above is usable. When the bed is not visible, surveying is initiated on a uniform 0.15-m grid and adjusted when major grade breaks are encountered. Target vertical resolutions are set to capture the peak boulder elevations and minimum pool elevations. Boulder circumferences and boulder toes are also surveyed. 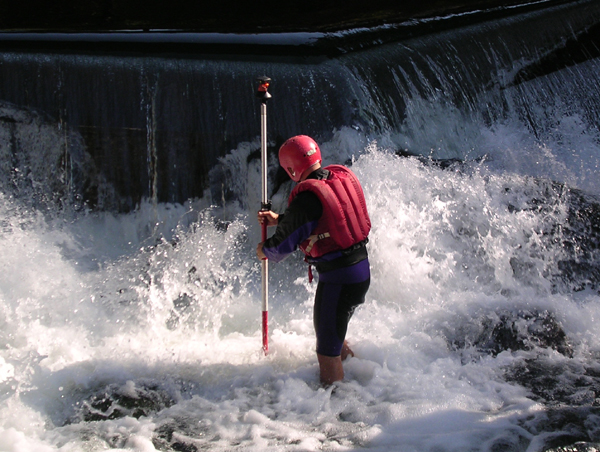 For water surface topography, a stratified transect-based approach is used. This approach involves shooting additional survey points in rapidly-varying flows such as supercritical jets and shooting fewer survey points in gradually-varying flows such as plunge pools. The only grade breaks incorporated are the intersections of supercritical jets with jump toes. The temporally ÒaveragedÓ water surface elevation (WSE) is measured by repeatedly lowering the rod tip into the flow. Attempts are also made to minimize flow disturbance from a surveyor. 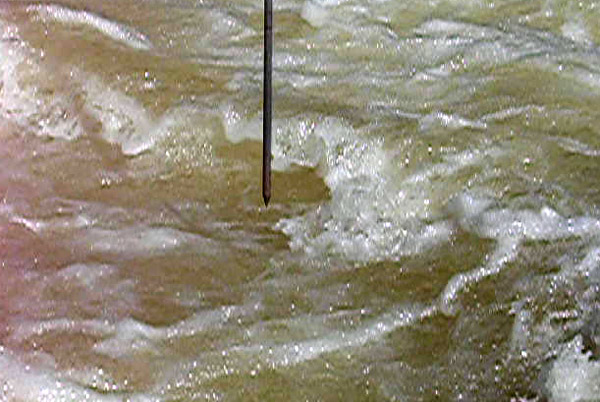